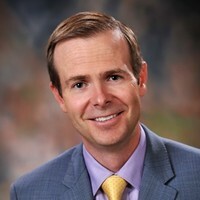 Mark R. Greenwood, M.D grew up in the small rural Utah town of Richfield as the son of a country doctor. His goal was always to become a Family Physician and join his father in practice. Following college at Brigham Young University (B.S. 1996), Medical School at The George Washington University (M.D. 2000), and Residency at the University of Utah (2003), that dream became a reality. In 2003 he joined his father in practice with the Intermountain Medical Group providing full spectrum Family Medicine in Richfield including outpatient, inpatient, ER, and obstetrics. In 2012 he became the Medical Group Rural Region Medical Director. In August of 2016 he became the Medical Director of the Intermountain Healthcare Primary Care Clinical Program, where he led improvement efforts around population health, chronic disease management, and wellness and prevention. In 2018 he was named Medical Director for the Family Medicine Service Line in the Intermountain Medical Group with accountability for 50 Family Medicine Clinics, 200 Family Medicine Physicians, and 70 Family Medicine APPs. He is now thrilled to join the Molina Family as CMO for Molina Healthcare of Utah and Idaho

The George Washington University School of Medicine and Health Sciences